For any real foodie or food lover, salt is a whole lot more than just the white, bleached stuff you see at the grocery store called "table salt". For the most part we avoid this type of salt in our home and instead take advantage of the wonderful benefits of unrefined sea salt. Unrefined salts have essential minerals in them and the actual range of color that sea salts come in is from their mineral content. 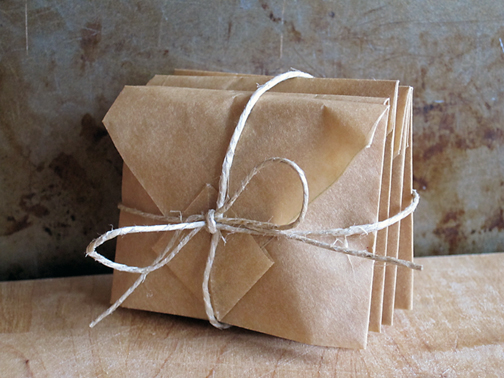 Many believe that salt should be avoided with the belief that they increase our sodium levels. While this is true, the type of salt being used actually make an extreme difference in how it affects the human body. Table salt should be avoided if at all possible. It's a highly processed ingredient that is mostly sodium chloride mixed with anti-caking agents and other harmful chemicals. Dr. Mercole shares in his article Debunking The Salt Myth, 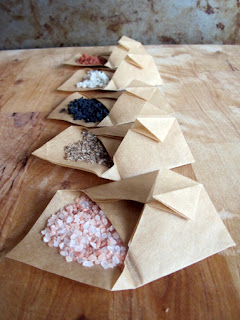 Today's table salt has practically nothing in common with natural salt. One is health damaging, and the other is healing. Natural salt is 84 percent sodium chloride, and processed salt is 98 percent. So, what comprises the rest?

The remaining 16 percent of natural salt consists of other naturally occurring minerals, including trace minerals like silicon, phosphorous and vanadium. But the remaining two percent of processed salt is comprised of man-made chemicals, such as moisture absorbents, and a little added iodine.

You might be tempted to think "salt is salt," but even the structure of processed salt has been radically altered in the refining process. Refined salt is dried above 1,200 degrees Fahrenheit, and this excessive heat alone alters the natural chemical structure of the salt. What remains after ordinary table salt is chemically "cleaned" is sodium chloride,

The processed salt is not pure sodium chloride but is only 97.5 percent sodium chloride and anticaking and flow agents are added to compromise about 2.5 percent. These are dangerous chemicals like ferrocyanide and aluminosilicate.  Some European countries, where water fluoridation is not practiced, also add fluoride to table salt. In France, 35 percent of table salt sold contains either sodium fluoride or potassium fluoride and use of fluoridated salt is widespread in South America.


Salt is essential for life—you cannot live without it. Salt has always been important to human life on this planet. Even the word "salary" comes from the root "sal," because Romans were paid in salt. African and European explorers traded an ounce of salt for an ounce of gold—salt was literally worth its weight in gold. Unrefined natural salt is important to many biological processes, including:

In the last year or so I noticed that our local co-op started selling a variety of sea salts in the bulk section of the store. This is a great way to try a variety of different salts without having to buy a large quantity. Besides varying in color, each salt has it's own flavor and can be a fun addition to cooking time. 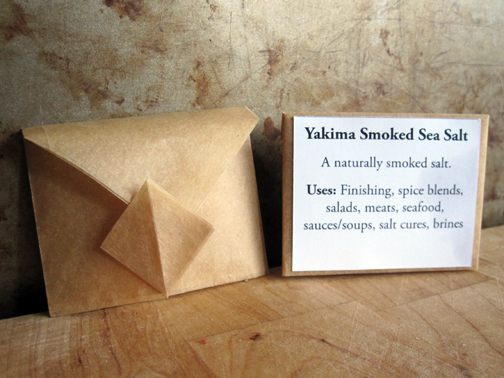 For a fun addition to the Christmas gift basket consider adding a mixture of sea salts. I made small origami envelopes out of non-bleached parchment paper and then put a label on the back telling what the salt is and how it can be used.  I included 5 different types of salt all together, just enough to wet the appetite for the variety that exists and found some basic descriptions online. 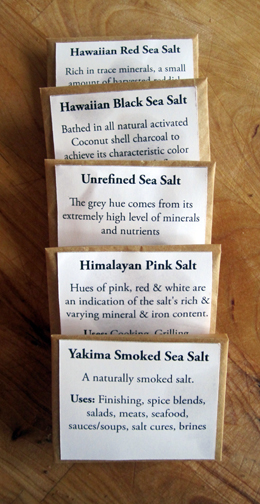 Unrefined Sea Salt
The grey hue comes from its extremely high level of minerals and nutrients.
Uses: Like table salt.


How to make the envelopes.

Parchment paper ( I used the stuff from the kitchen) or another paper of choice
Scissors for cutting paper into a square if not already
Ruler
Your hands! 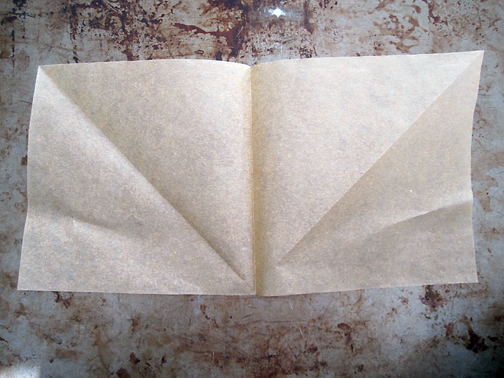 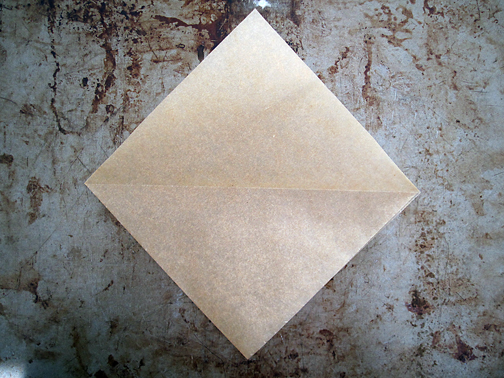 1. I double up my parchment paper since it's so thin. Simply fold a large piece of parchment in half, then fold into a triangle to make a perfect square. Use a ruler to measure one side of the triangle to make a consistent length if you plan to make more than one envelope. For these I made each side 6.5" long. Cut off excess paper. 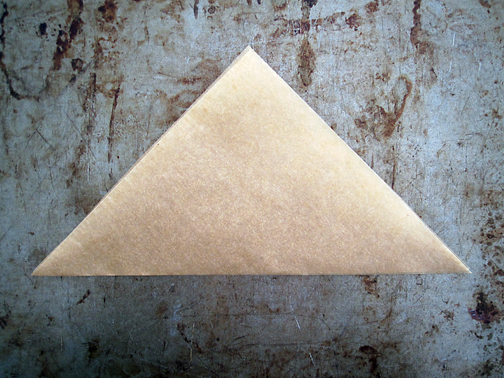 2. Fold bottom corner of square up to create a triangle. Crease the edge with your finger nail or a bone folder. The sharper the creases, the better the envelope will hold together. 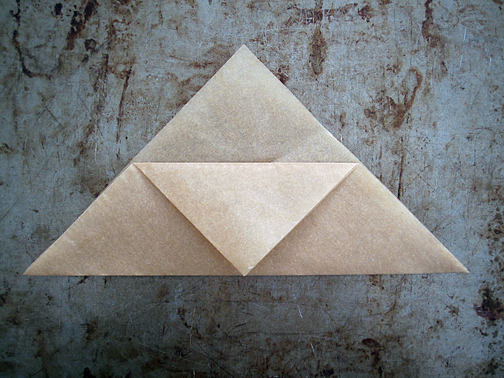 3. Fold front piece of triangle down to bottom. (If you doubled up the parchment like I did this would be the top two pieces you'd fold down, leaving the bottom to pieces on the folding surface.) 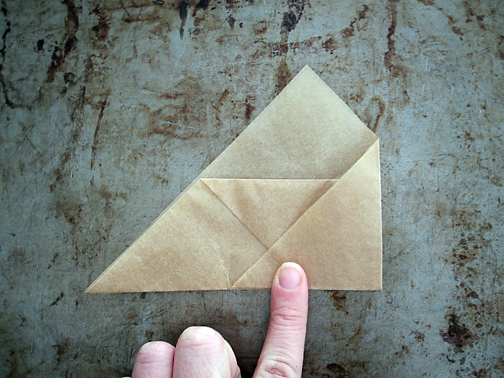 4. Fold the right third of the triangle over to the left, lining up the bottom as straight as possible. Try your best to make the section as close to a third as possible. It will help later. 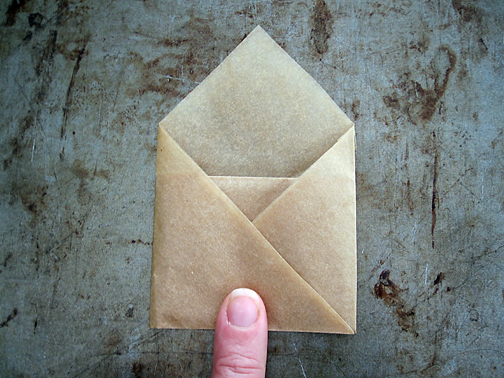 5. Now fold your left third of a side over to the right, overlapping the fold you just did. 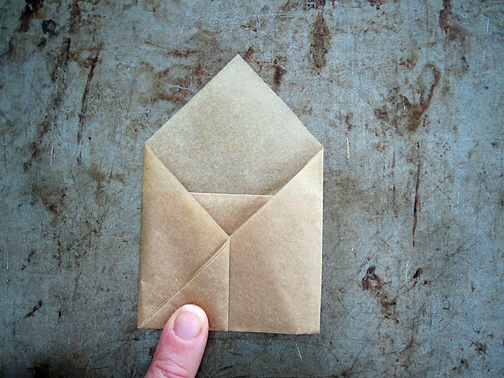 5. Fold the corner of the edge you just folded over to the right back on itself back over to the left corner.

6. You now want to open the small triangle you just made and lay it flat in the middle to create a diamond shape.

7. Fold the top flap down of your original triangle. 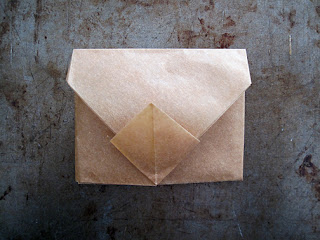 8. Tuck flap into the flatten diamond you made in step 6. Your finished!