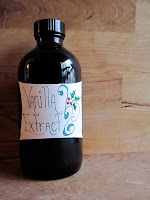 Pure vanilla extract is an essential ingredient for any baker and purchasing a small bottle of the real thing can be very expensive. It turns out that making your own vanilla extract at home is actually easy and can be more cost affective, especially if you make it in a larger batch.

The first bottle of extract I made was this summer. As I looked into different ways people suggested to make this product, it seems the most common combination was three vanilla beans added to two cups of vodka. I started with this, but after a month of letting the extract age I still had a product that smelled strongly of vodka and only had a hint of vanilla flavor. A bit frustrated that I wasn't getting the results I was wanting and not desiring to throw away what I had started, I decided to add 4-5 more vanilla beans to the mixture. After another month of waiting I had something far closer to a nicely fragrant and well flavored extract that I could actually use for baking.

Before starting this post I went ahead and researched recipes once again, this time coming upon a site called Vanilla Review. This site seemed to have far more knowledge about making vanilla extract and ended up confirming what I had figured out this summer... you need a decent number of vanilla beans to make a good extract. Their recommendation is around 30 grams of vanilla beans for every cup of vodka, which is roughly about 8 vanilla beans. They also recommend getting grade B beans, which would be a dried out bean. Grade A would be the plump, moisture rich ones that look beautiful, but in making extract can actually add extra unnecessary moisture. In the end get what you can get. I bought my vanilla beans at the local co-op in the bulk section and didn't have a choice between grade A and B. I did see that Amazon sells vanilla beans and for a very, very good price, so if you know you are going to make a large batch, they would be a good place to price check. Don't buy your beans at a regular grocery store. They are outrageously expensive. I paid $1.90 per bean, but Amazon had them around $.75 each when a larger quantity was purchased.


This extract needs time to age. Give it a minimum of four weeks and up to 6 months. Vanilla Review recommends straining out the vanilla beans after six months, but many other sites don't, so I guess that's up to you. If the beans are removed they can be used to make vanilla sugar. Now because this little item needs some aging time doesn't mean it wouldn't still make a great Christmas gift. Tell the lucky person receiving it that it will be ready to use just in time for Valentines day! Nothing needs to be done with the extract, except perhaps the occasional shake. It can sit on the shelf and basically be forgotten until it's ready to be used.

A tinted glass container is wise for protecting your lovely extract from sun exposure. You can buy small bottles for a couple of dollars, re-use old glass vitamin containers or even paint your own glass jar dark and then hand paint a label on it. Get creative and have some fun! I used some glass etching cream from Michaels to etch "Vanilla" on the outside of my glass bottle. The etching cream was about $13 for a smaller bottle, with a coupon I received 40% off (always try and use a coupon at Michaels, you can print them off from online) making my total around $7, not bad and I have other uses for it in the future. I also tried my hand at making a homemade label. Someone who knows calligraphy could have a lot of fun there. No matter how you do it, it comes from the heart and that's all that matters. 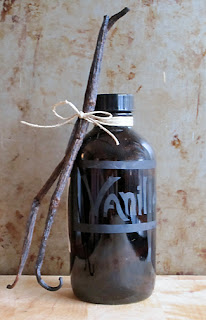 2. Fill glass container with vodka, preferably with enough that will allow the bean to be fully submerged.

3. Cap it and allow the mixture to sit for at least 4 weeks. After this time if it still smells strongly like vodka and doesn't have enough flavor allow to sit for another month and then test again.

4. After 6 months the beans and vanilla seeds can be strained out if desired.