Are you a fan of cereal, but try to avoid the "not so healthy for you" stuff that's sold at the store, which I might add is basically every type of cereal sold? Yes, even the "healthy" stuff really isn't good for you. That's me, at least I try to avoid the stuff at the store. The only time I ever eat cereal is at night as a snack and I like to have some on hand for when guess come, because those who visit us never seem to be the big breakfast eaters that my husband and I are.

This is a recipe from Nourishing Traditions by Sally Fallon. It's easy to make and is a much healthier version to store bought cereal, even in comparison to traditional granola.


What You'll Need
*Crispy nuts are raw nuts that have been soaked in water with a bit of salt added to it. You soak the nuts overnight and then dry them out in a food dehydrator or a 150 degree oven. If you don't have crispy nuts on hand you could alternatively use raw nuts.

Once again, the habits of traditional peoples should serve as a guide. They understood instinctively that nuts are best soaked or partially sprouted before eaten. This is because nuts contain numerous enzyme inhibitors that can put a real strain on the digestive mechanism if consumed in excess. Nuts are easier to digest, and their nutrients more readily available, if they are first soaked in salt water overnight, then dried in a warm oven.
~Nourishing Traditions by Sally Fallon, page 512 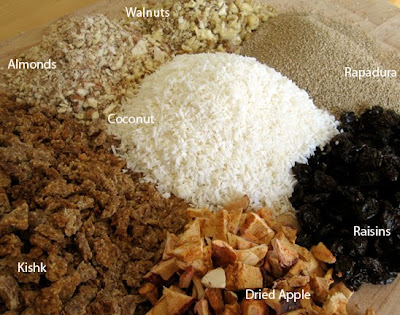 1. In a large mixing bowl mix together the 4 cups of cracked wheat and the 4 cups of
yogurt. Cover the bowl and place in a dark place or cover with a towel and allow to sit for 24 hours. We are making a fermented dish called kishk which originated in the Middle East.

2. After 24 hours, spread kishk mixture as thinly as possible on oiled or lined cookie sheets and place in 150 degree oven overnight. Most ovens don't go down this low, I have done it at 170 degrees, which is the lowest temperature my oven will go down to. This works, but I'd do it during the day, so you can occasionally check on it to make sure it isn't baking, but instead drying out. You'll know it's baking because it will start to turn a darker brown, like when making cookies. If you go the 170 degree route, turn your oven on for a little while then turn it off and leave the door closed. Alternatively, you could use a food dehydrator for this step.

Note: It's really important to spread the Kishk as thinly as possible. The first time I did it, I left it a little thicker in places and it was so much harder to chop up (which we'll do in the next step), I couldn't even break it down in my food processor.

3. Once kishk has completely dried out, either using a knife or a food processor, chop until it's coarsely crumbled. I think using the knife is easier. I found that the food processor over chopped some of it and left other pieces in chunks to large to eat. 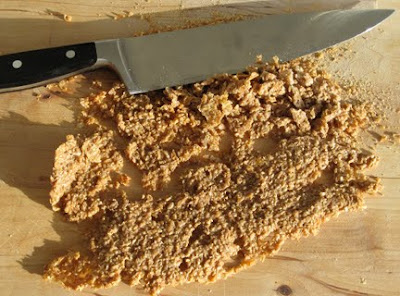 4. Place chopped kishk into a large bowl and add the rest of your ingredients. Mix well then place into a zip-lock bag or an airtight container.

Kishk granola can be stored at room temperature for several weeks or in the fridge for longer.
Eat it just like granola with milk or cream or sprinkle on yogurt. 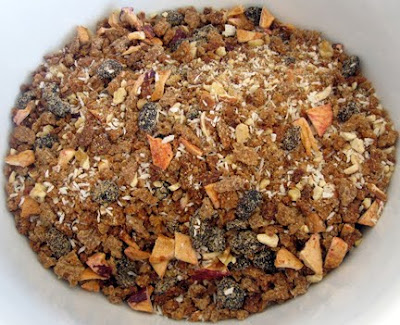 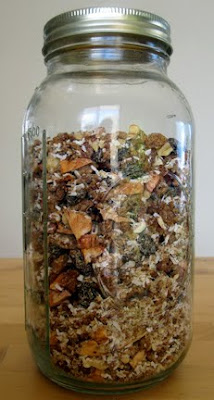