Okay, so if you're a hardcore gnocchi lover and maker you're probably thinking, "whole wheat gnocchi, really?" I know, I know, it's hardly the traditional way to make this awesome Italian dish. However, I knew it could be done and if I truly want to get rid of white flour in the kitchen, this was one recipe I had to master with whole wheat flour. Hands down white flour works best for making gnocchi. The main reason, in my opinion, is that white flour is more accepting of all the different sauces you might want to put on gnocchi. Whole wheat brings its own flavor to the table and it doesn't necessarily go with everything – at least not as well. Now others would say that using whole wheat flour would give you too dense of an end product and that can be true, but that's where my experimenting came in and the end results were fluffy and decently light.

The first couple of tries at making whole wheat gnocchi I tried to be a "true Italian" and only used potatoes and flour to make them. While this does work, I found I had to add more flour then I'd like, to get the potato dough to hold together the way it needed to when it gets boiled. White flour has a much higher gluten content and a much smoother texture than whole wheat, thus giving your dough a better consistency. By round three the end results weren't bad, but the whole wheat flavor was a bit overpowering and the gnocchi was a bit rubbery. That meant back to the kitchen and trying some different options.

That's when I decided I needed to go to the cheater version of making gnocchi – meaning using egg in the dough. A true Italian gnocchi maker would never do this, of course, they probably wouldn't use whole wheat flour either. All I cared about was having a dish that tastes good and was healthier for my family and that meant going the route of adding egg. Why egg? It acts as a binder and helps give a better consistency to your dough, thus making it easier to handle. You also don't need as much whole wheat flour to get the dough to hold together.

My end results with the egg were great. At least in my family's opinion! ( : We enjoyed whole wheat gnocchi that had a light and fluffy texture and didn't have an overpowering whole wheat taste.

*If it's possible, I would recommend a soft white wheat flour instead of a hard wheat flour. The soft white wheat doesn't add as strong of a wheat flavor and is easier to work with. If you purchase pre-ground packaged flour, read the ingredient list and it should tell you what type of wheat flour the company used. If you're new to using whole wheat flour, you're probably thinking, "huh?" I know it's strange at first, but there are different types of whole wheat flour. Soft white wheat is often used for baking cookies, cakes, etc., where as hard wheat is usually used for bread making. I have a post I want to put together that goes into this subject in great depth, but that is for another time.

1. Pre-heat your oven to 350 degrees. Pierce the skin of your potatoes and place in oven-proof baking dish. Bake potatoes for about 1 - 1 1/2 hours, depending on their size. They're done when you can easily pierce them with a fork. You could also boil the potatoes, which would be the more traditional method. The reason I don't do this is simply to avoid any extra moisture in the potatoes that may require the addition of more flour when making the dough. 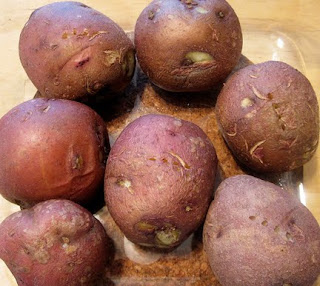 2. Once the potatoes are done cooking, slice them into large chunks (skins still on) and puree them through a food mill. If you use a potato masher instead, you'll either want to dice the potatoes pretty small or remove the skins. If mashing the potatoes by hand you need to make sure you get the potatoes completely free of lumps, so it might take quite a bit of mashing.

NOTE: The reason I don't remove the skins on the potatoes is because that's where the majority of your vitamins exist, either in the skins themselves or just below the surface. Always use organic potatoes, they are actually one of the most important vegetables to eat organic because of how easily the pesticides can leach into them. Potatoes are actually decently healthy for you, despite what some say, but again it's important to leave the skins on. You won't keep all the skins when you run a potato through a food mill, but you do get a decent amount, which is better than nothing. 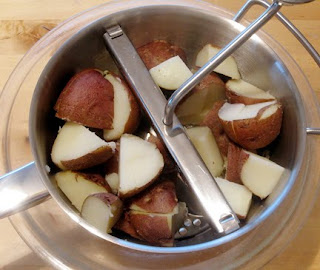 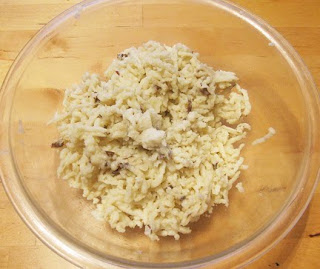 3. Next, add your egg and 1 1/2 cups of flour to the mashed potatoes. Knead the dough by hand, either in the bowl or on a clean working surface. Add a bit more flour, a tablespoon or two at a time if the dough is overly sticky. You're done when the dough is soft and smooth, but is still just a bit sticky and it can be rolled into a ball easily. 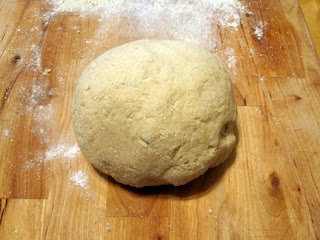 4. Divide the dough into 4 equal sections and roll each section into 3/4" thick ropes. Cut the ropes into 1/2" pieces. 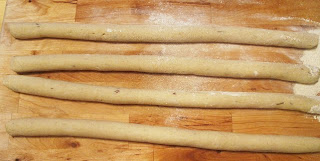 5. Here's the fun part. Using the backside of a fork and your index finger or thumb, roll the pieces of dough down the tines of a the fork to create a slight c shape. On one side you have the indentation of the fork tines and the other side a depression from your finger. This is how sauces cling to the gnocchi. Shape all the dough pieces like this before proceeding. While you're shaping your gnocchi, it's a good time to start getting a pot of salted water boiling. I like to add at least a tablespoon of salt to my water. 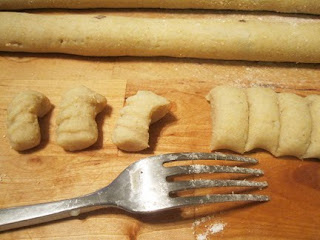 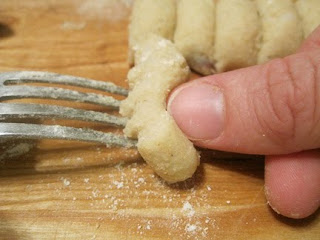 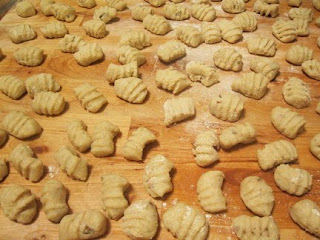 6. Once your water is boiling drop your gnocchi into the water, working quickly so they all cook for about the same amount of time. With the pot I used, I divided my uncooked gnocchi into four batches. You don't want to put too many in at once or they will cool the water down too much and won't cook correctly. Once the gnocchi float to the surface, let them cook for about 10 more seconds and then remove them with a slotted spoon.

Note: If you're new to making gnocchi, try only dropping in 2-3 to test them. If they disintegrate or fall apart once they're done cooking you can roll the balls of uncooked dough back into a ball and knead in a bit more flour.

7. Place cooked gnocchi into a warmed serving bowl and coat with a bit of butter and then proceed with cooking the rest.

8. When all the gnocchi are done cooking, pour the rest of your butter on them, sprinkle with a bit of sea salt and sprinkle on the parmesan cheese. You can also add a bit of chopped parsley for garnish. Enjoy immediately and make sure there no leftovers! That means eat your heart out! Gnocchi isn't one of those foods that saves/reheats well. 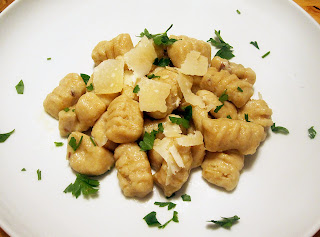