Part 1: A look at how I believe my changing diet with each pregnancy has affected my children and the pregnancies themselves.

With this pregnancy in full swing, I am in nutrition mode, trying to continue to figure out and research the best diet for myself, the growing child in me, as well as, how to best feed my growing children. I'd like to share some history about my other pregnancies, because (in my opinion) I have seen direct correlations to me changing my diet and the outcomes of each pregnancy, birth and overall health of each child there after. I'm splitting it up into four segments, since this is my forth pregnancy.

Check out the things that have changed and the outcomes of each pregnancy and see if you think that food may have played a more vital role in my children than what most Western medicine obstetricians, pediatricians and nutritionist understand or share with us.

To read about my other pregnancies check out the links below.

As a mid 20 something I was living life to the fullest. My husband and I ate out regularly, enjoyed a very social life, stayed up to the wee hours of the morning and I drank to my heart's content. Drinking was my release point and my way of socializing. I was always far more relaxed after a drink or two. My eating habits were fairly terrible in comparison to today, although I did try to eat organic as much as I could. At this point in my life I never ate breakfast, for lunch I'd try to down a fruit smoothie from a nearby grocery store and for dinner I often ate a pasta dish of some sort accompanied by several glasses of wine. I was suffering from my eating habits. I often felt ill and shaky by mid morning from skipping breakfast, so the quick, easy solution was the fruit shake which would boost my sugar levels, except that I couldn't actually drink much before not feeling good again as my sugar levels would sky rocket (at the time I didn't know that I was struggling with hypo- and hyperglycemia.) I'd keep a protein bar in my purse or some nuts to snack on to get me to dinner. Pasta was always one of my favorites and I'd try to eat a "healthy" dinner, but I just didn't understand what my body was really telling me it needed.


During this time I began to have some very uncomfortable abdominal pain. After about three months of the pain bothering me daily I went to a doctor to see if I could find some answers. It turned out I was suffering from ovarian cysts. The doctors basically told me I had to tolerate the pain and in the end there wasn't much I could do about it, except take some over-the-counter pain killers. I spoke to other doctors in the same office and one finally mentioned that I might actually be suffering from endometriosis, but only an operation could tell me for sure. Not at all up for that, I headed home and immediately started researching what endometriosis was and what I could do to help my body. In my research I discovered that getting pregnant and keeping the pregnancy to full term was very difficult for people who suffer from endometriosis. This was devastating to me, since I knew I wanted to have children. Until this point my husband and I had been using natural child planning methods, but upon finding this new information out we decided that perhaps it was time to go ahead and try and have a child. We were ready for children and there was no reason to wait, except for the giving up of our social lives as we knew them. 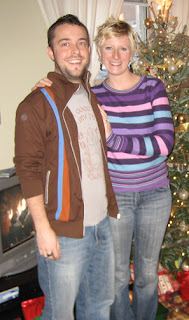 Through all of this my mom had started sending me quite a bit of health/diet related information, because she firmly believed that most of my problems were caused by my diet. While I was interested in the information, I mostly breezed over the reading material and kept some of the knowledge and kind of ignored the rest, for the time being at least. I also was able to visit a homeopath. He mentioned that he felt that I was actually allergic/intolerlant to wheat/gluten and this is what was causing the cysts to form and creating so much of the pain I was having. This was intriguing to me. I had never considered having an allergy, since I always thought allergies showed themselves more on the surface of the skin. He recommended that I go off of all wheat for at least a month to see how my body felt. Seeing as how wheat was a HUGE part of my diet, that turned out to be much harder to do than I thought and only after about a week I gave up. Although, this information did start opening up my radar to reading information on wheat/gluten allergies. I still didn't come from the mindset that food played such a vital role in our overall health.

Before long I found out I was pregnant and I was thrilled. We had just moved into our first home and within a month or so found out about the pregnancy. I could hardly contain my excitement and keep the news to myself. I had my first OB appointment and all was well, as well as they can tell for early on in a pregnancy. However, while at work at about my 6th week pregnant I began bleeding. I knew it wasn't good. As I  drove home I was in tears at what it probably meant. I called a nurse at the doctors office and she told me that I was most likely miscarrying. My mind immediately went back to thinking about me possibly having endometriosis. It was easier to grasp that this may be the problem, which the doctors had told me about, versus having a wheat/gluten allergy which the homeopath believed to be the source of the issues I was having.

The miscarriage was devastating to me. That night I laid in bed, my husband doing his best to comfort me and me holding onto my little Yorkie pup who was the only thing keeping me from completely breaking down.

I went back to the doctors who had told me I was pregnant. They treated the miscarriage like no big deal, which was hard and frankly were basically rude about answering the questions I had. Yes, I know that miscarriages happen, they actually happen a lot, but that doesn't make it easier and sometimes a bit of compassion can go a very long way to help someone feel encouraged. They told me to start taking a contraceptive and make sure to not get pregnant again for at least three months, but preferably six months, so my body had time to heal. However, I didn't take contraceptives (except for a short time before I was married) and had no intentions of starting to take them. I really wasn't too worried about getting pregnant and at the time, felt that it would be great to be pregnant again if I did happen to be so lucky...


In Part 2 I'll share about my second pregnancy, how life changed and the birth of my beautiful baby boy, who is now four years old.