About a year ago I made my first batch of homemade tortillas. I have to say that once you've had them homemade, its very hard to go back to the store bought ones. Homemade tortillas are much lighter even with whole wheat flour, and frankly they're pretty easy to make. The first round or two can be a bit time consuming as you get used to rolling the dough out and baking it, but you quickly get the hang of it and can get into a good rhythm. Once you do that, you'll fly through making them.

I am doing my best to use whole wheat flour as much as possible, but there are those times when white flour is so good in a recipe that you can't help but use it at least occasionally or perhaps for guests who aren't accustomed to whole wheat products. So you'll see a white flour recipe below too! It's not my own recipe, I found it on the internet, but don't remember where so I can't give credit where credit is due.

One thing to note. A lot of tortilla recipes have you cook the tortillas on the stove. I've actually never done it this way before as the white flour tortilla recipe I first started using had you cook the tortillas in the oven and that's how I've always done it. It's very easy and goes extremely quick. From what I've read, to cook tortillas on the stove, heat a cast iron skillet and place tortilla in it, cook on each side until slightly browned. If you do it this way, let me know how it turns out.

For all the recipes you'll also need:

1. With your pizza stone or cookie sheet inside, preheat your oven to 500 degrees.

Note: put your cookie sheet upside down in the oven if it has a lip of any kind. This will make it easier to get your tortilla on and off of it.

2. In your large bowl, mix together all of your dry ingredients, then add your olive oil and milk or yogurt. Mix all ingredients together until a moist, but not sticky ball can be made from them. If your dough is too dry add a bit more milk/yogurt or if it's too wet then add a bit more flour.

3. Turn dough out onto a clean, lightly floured working surface and kneed for a couple of minutes. In the case of the first recipe, you can skip this step. 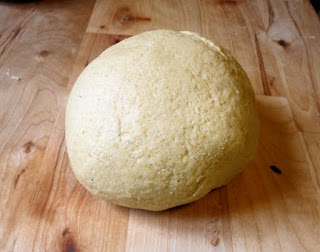 4. Cover the dough with some plastic wrap or a bowl for about 10 minutes then cut into 8 pieces and shape into small balls. Cover the balls and let sit for about 20 minutes. You could skip the sitting times, but I've found it's much easier to roll the dough out when you do this step. 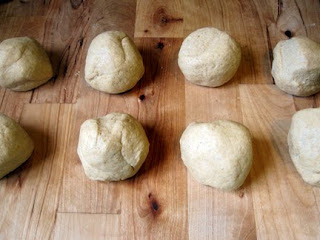 5. Take one of your balls of dough and flatten into a round disk with your hands, then place on a floured work surface. Using your rolling pin, roll the dough out as thin as possible, rotating the dough several times during the rolling process so it doesn't stick to the work surface. If you leave the dough too thick you'll have something more similar to a pita then a tortilla once it's been baked. 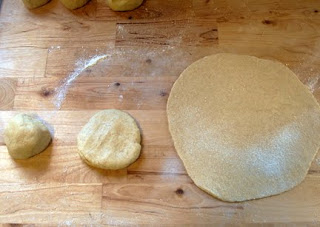 6. Dust each tortilla with flour and place on a plate, stacking them as you go. If you are concerned they'll stick together (which happened to me once), place a sheet of wax paper in between each one. Alternatively, roll out two tortillas, bake them and while the two are baking roll out two more. You have to work pretty quickly to do it this way, but it does work.

7. Okay, so this next step takes a little practice. Take one or two of your tortillas and put them directly on the pizza stone or cookie sheet. Bake it for about 30- 45 seconds. Yep, that's it. Once they start to bubble up, they're done. You can flip them once if you think they need it, but don't over cook them, especially the whole wheat ones. Use your tongs or spatula to remove them from the oven then wrap them in a couple of towels to keep them warm while you bake the rest. The towels will also keep them moist so they are easier to roll-up later on.

Now time to enjoy them with your favorite filling or with a slather of butter! 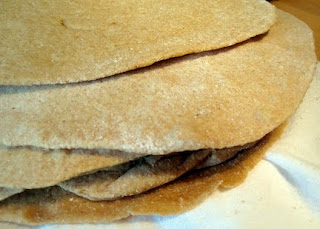