If you are going to be a home baker and you want to use whole wheat flour as much as possible, It's a good idea to have a delicious whole wheat pie crust recipe in your arsenal. There is this myth that you can't make a good pie crust with whole wheat flour, which is beyond me because it's simply not true. I've been doing a lot of experimenting with pie crust over several months, trying different types of flour, fat and liquid. I'm still working on a dairy and wheat-free version, but in the mean time I thought I'd share a more traditional pie crust – one with lots and lots of butter! :-)

If you are a calorie counter you might want to turn that part of your brain off while making this recipe! :-) Good fat is essential to making a delicious, flaky pie crust. There's just no getting around it. Even a couple of tablespoons can make a difference.

The first time I made this recipe I used white whole wheat flour and the second time, spelt. Both work very well.

1. Mix together your flour, salt and optional sugar. I will sometimes use sugar if I'm making a fruit pie.

3. Using a pastry blender or two knifes, cut your butter pieces into your flour until there are no pieces larger than a pea. Be careful here, you don't want to cut the butter up so much that it begins to become a paste with the flour. It's important to keep the butter as cold as possible. The chunks of butter are what create the flakiness in the crust once it's been baked. 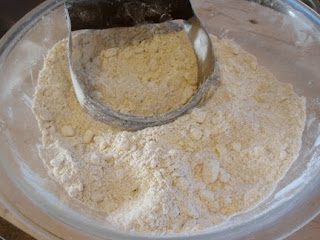 4. Drizzle your milk a couple tablespoons at a time over your flour mixture then using a fork mix it in until the mixture is evenly moistened and begins to stick together. You might not need all 12 tablespoon of milk and you may need more. When you can press some of the mixture together to form a ball that isn't sticky, you have added enough liquid. 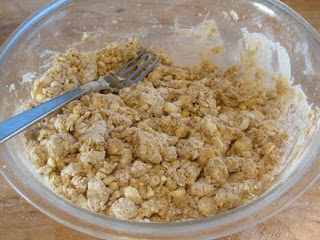 5. Turn the mixture out onto a work surface and press it together until it forms a ball. If it's still too crumbly, sprinkle a little more milk over it. Divide the dough in half then flatten into a round disk. 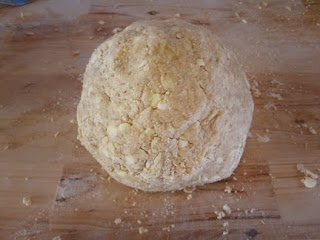 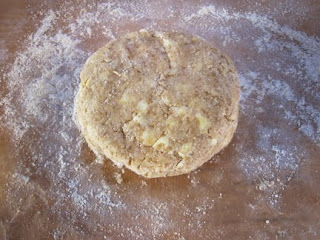 From here follow your favorite recipe. You don't need to refrigerate this dough before rolling it unless your butter has begun to soften. If you think your butter has softened too much, then put the dough in the refrigerator for about an hour before using it. Pie crust dough freezes very well, so it never hurts to double your quantity and put some in the freezer for future use, just make sure to wrap it really well so it doesn't get frost on it.