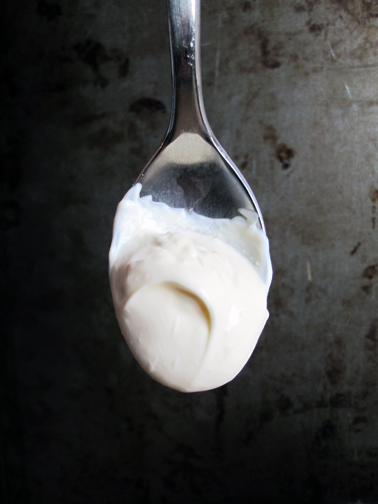 Crème fraîche versus sour cream? From what I've read the main difference between the two is their butterfat content, although some further separate the two by one, the crème fraîche, having a lactic acid bacteria added to it, while the other naturally ferments on it's own. Crème fraîche butterfat content is usually around 28% - 40% while sour cream is between 14% - 18%.

Traditionally, sour cream was exactly as it was named and a very different product than what we are accustomed to seeing at the store today. It was fresh, raw cream that sat out and allowed to sour naturally in a warm place. The resulting product would be a thickened, naturally soured and fermented product that allowed cream to have a longer shelf life and was ultimately a way of preserving this prized ingredient. The sour cream we purchase now at the store has none of it's originally roots. First, it's almost always made with milk and often low fat. In order to give it the classic thickness and sour flavor thickeners and acids are added among other things. Next time you are at the store grab a container of sour cream, organic or not doesn't always matter, and check out the ingredient list. You may find yourself feeling very disturbed at what you read, or try to read, because some of those words need a translator to go with them. 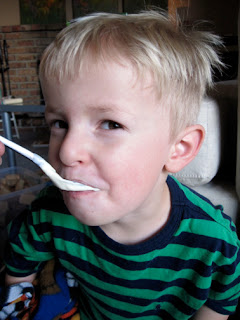 If you have been following this blog for any amount of time, I hope by now you've realized that I don't shy away from real fat, not the stuff you find in candy bars, but fat in it's natural, whole form coming from organic foods (coconut oil, olive oil) or free-range, grass-fed animals (for cream, butter and so forth) or from an animal humanely treated and fed the best foods possible (for lard), Actually, I firmly believe that healthy fat is essential to our bodies, our brains and believe it or not, for maintaining a healthy weight.

The first time I tasted real sour cream from an awesome farmer who had the best raw milk to offer, I was shocked at the truly exquisite flavor and could have quite possibly eaten the whole container myself. I don't have regular access to raw cream, so I now often make crème fraîche and my children LOVE it. You can see the picture of my son to the right who was "patiently" waiting while I took photos before I'd give him a spoonful to eat. We most typically eat crème fraîche in scrambled eggs, on top of any bean dish or the several Spanish dishes I like to make, and on top of soup, where it is fantastic. 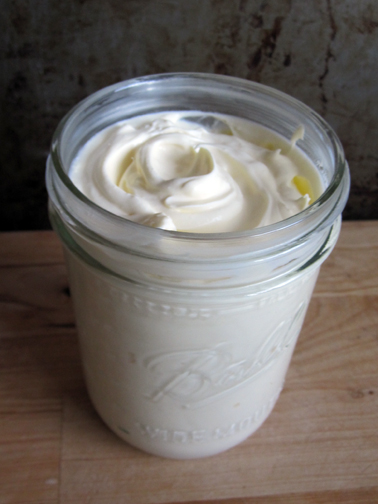 Getting Started
If you are blessed enough to have access to raw milk and cream from a healthy, clean cow (or goat) then making your own real sour cream is extremely easy. Often raw milk* that comes directly from the farmer has not had it's cream separated out of it. If you allow your milk to sit on the counter the cream will rise to the top. After about 24 hours of sitting out (giving that the temperature in your home is between 70° F - 80° F) your cream and milk will have soured. The resulting products are REAL sour cream on top, which can be scooped off and stored in a container of it's own to use however you wish and clabbered milk on the bottom which can be used like buttermilk. If you only have raw cream, the same process is used. If your cream hasn't soured after 24 hours, give it up to an additional 12 hours to sour. The cooler the environment the longer the cream will take to sour.

*While I'm a strong believer that we should have the personal freedom to choose to drink raw milk I think it's extremely important to know your farmer when doing so and purchase your milk from a trusted source. Not all raw milk is the same and I'd certainly never drink raw milk coming from a standard dairy farm that's milk is intended for pasteurization. Instead, the cows should be humanely treated, never given growth hormones, grass-fed (entirely if possible) and live in fields where they graze as they desire and soak up the benefits of the sun rays. The milk should also be organic, but USDA certification is irrelevant, if you know your farmer you'll know if they are using organic practices for maintaining their animals. Check out Realmilk.com for more information on this topic. 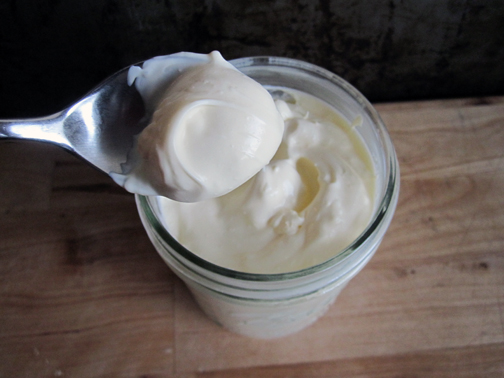 Making Crème Fraîche
What You'll Need
~2 cups
1 pint of cream
2 tbsp. cultured buttermilk
Getting Started
Now, most of us aren't so blessed to have regular, if any access to raw milk, but no worries, head out to your store and find the best organic cream that hasn't been ultra pasteurized. It's actually very common for organic cream to be ultra pasteurized, so read the label closely. In the Twin Cities, my favorite cream to get at the co-op is from Cedar Summit's, which is organic, comes from grass-fed cows and is sold in a glass container.

In a glass pint container or another suitable container (glass not plastic) stir together cream and buttermilk. Put a lid on it and place is a warm place (between 70° F - 80° F). Allow to sour/ferment for 24-36 hours. Your cream should smell fresh but have a pleasant sour scent. Don't be overly concerned if your crème fraîche is a little thinner than you had hoped, it will thicken more once it's chilled in the refrigerator. I have had my end product so thick once it was chilled that it could be spread like butter.

I have found the typical shelf life for crème fraîche is 1-2 weeks and sometimes a bit longer. Use your nose and your taste buds to let you know when it's gone bad, that is, if it ever lasts that long.