Updates and a big boys 4th birthday with a special cake!

Time continues to fly by and I've yet to get a single post up that I've wanted to do for, oh I don't know, about 3 months. Oh well, that is how it goes sometimes. We have been staying incredibly busy on various projects, the biggest being the one that finds us a new place to live. In about three weeks we will be moving and we only found out where a couple of days ago... FINALLY! Not knowing where we were going to move hasn't been the most settling of feelings, although I've been working at trying to not be stressed and simply hand over the whole situation to the Lord.

Over the past couple of months we've tried making an offer on three different homes. Our last offer has finally paid off, or at least we hope, since we still need to have inspections done. I'll be sharing some of the things we'll be doing with this new home, since it pretty much needs to be gutted. It will hopefully be a fun (although tons of hard work) rehab project and one that will leave us with a home ready to re-sell in the spring. More to come on that later.

Last weekend we celebrated my sons profound (at least in his mind) fourth birthday. Oh the anticipation! My son has been talking about his birthday just about every day for months.

When he turned two, I started a tradition of making a three dimensional cake. For his second birthday it was a firetruck, for his third birthday it was a baseball and this year I went with a pick-up or dump truck. My son has been asking for a special cake for weeks, he wanted a firetruck cake, because he remembered the cake from his second birthday, obviously a smashing hit. Since I'd done that already, I went with the next best thing, for him at least. 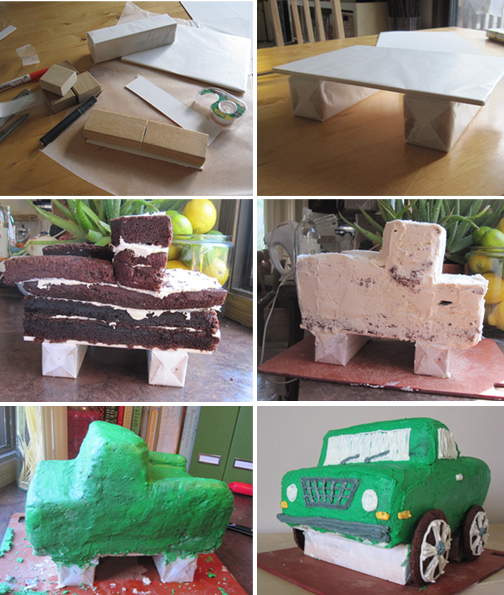 Oh did this cake gave me troubles from the beginning to the end!!! At one point I almost said forget it and about threw the whole thing in the trash. First the cake did not baking correctly, which I'll say is the first time I've ever had a problem with the recipe I use. 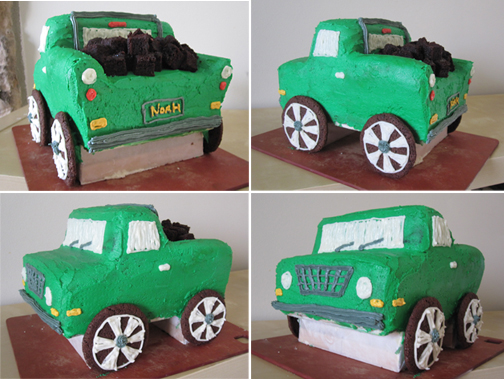 Then the all natural food coloring I paid a fortune for, was pretty much a waste because it left the icing a light violet color instead of the original blue I wanted (had I known the colors would be light I would have planned differently, but at this point I was already pretty frustrated and simply wanted something to start working correctly, so I grabbed the normal food coloring that I have on hand for making play dough.) Then the heat and humidity was so high on the day I was trying to frost the darn thing that the icing kept running/sliding off the cake. Part of this was my fault because I had put the cake in the freezer for a little bit to help set the crumb coat of icing, however when I pulled the cake out and started to put the next layer of icing on, beads of condensation covered the cake, making it simply impossible to ice. I finally set the cake aside overnight hoping that the cake would "dry off" by the next morning. Thankfully it did and I was able to continue forward with my plans, all be it with lots of icing having to be thrown away. Oh well, that's just how it goes sometimes. I only share this to let people know that pictures can be deceiving sometimes and while I think the cake turned out cute in the end, it wasn't a perfect process. Sometimes I think bloggers look like they live in this perfect world where everything always works for them and I'm here to let you know that isn't true! :-D 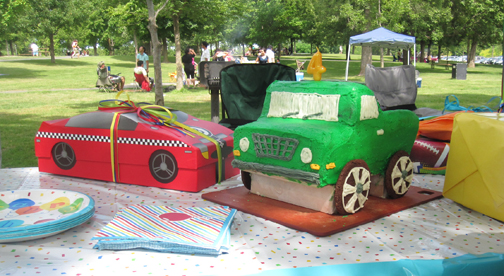 In the end the cake came together pretty well, not perfect, but my son loved it and that's all that mattered. We had a wonderful time at a local park, enjoying beautiful weather with the company of grandparents and my brother. I think the day ended up going pretty well and guess what... my son is already talking about his fifth birthday. Oh boy, hopefully we can get him thinking about something else or I just might be birthdayed out by next August! :) 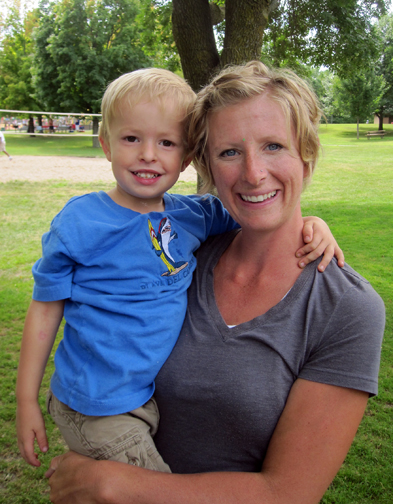 Stay tuned for some more posts coming later this week!

Email ThisBlogThis!Share to TwitterShare to FacebookShare to Pinterest
Labels: What We Are Up To