I have had the fun opportunity to sample some of New Belgium Brewing Company's beer as a part of the Foodbuzz Tastemaker's program. I received $50 from New Belgium to create a dish using their beer. Seeing as how New Belgium makes some of my husband's favorite beer, I certainly couldn't pass on this opportunity and we both had an enjoyable time pairing beer with different recipes, as well as, experimenting in the kitchen. 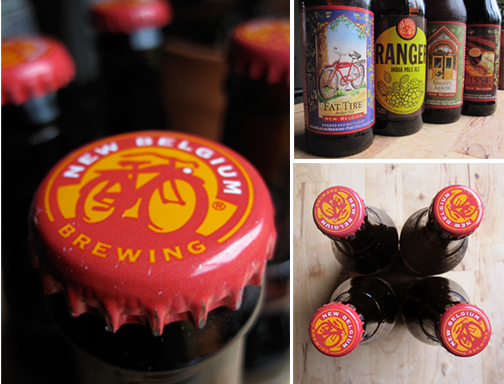 I decided to start my New Belgium experience by purchasing their Spring Folly Pack; which included, Fat Tire, Ranger IPA, Mighty Arrow and 1554 Black Ale. Then I headed home and enjoyed a mini beer tasting with dinner that night. Fresh homemade pizza was on the menu and since it wasn't planned ahead of time, I didn't have all the ingredients for the standard red sauce pizza, so it was time to experiment and improvise. Oh how glad I am we went this route because the pizza turned out fabulous and just might be a new favorite in our house and one beer in particular was a perfect accompaniment. What did we have? Well, first I made a white sauce with onion, cream, salt, a bit of flour and about a cup of random cheeses we had in the cheese drawer. We slathered that all over the unbaked pizza crust, then topped it with small pieces of fresh cauliflower and a sprinkling of oregano and thyme. We slid our pizza onto our pizza stone in our preheated 550° oven (key here, preheat your oven & pizza stone for at least an hour before trying to bake a pizza). While the pizza baked, we boiled 4 eggs to slice on top of the pizza, table side. As we sat down to enjoy our meal, took a bite of pizza and tasted some of the beers we knew that first we made an excellent meal choice and second the perfect beer to accompany each delectable bite was the smooth Fat Tire Amber Ale. 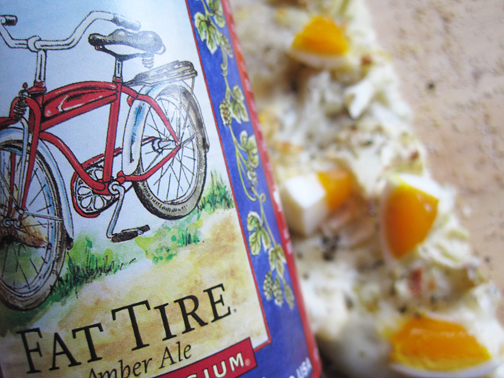 The next evening I was back in the kitchen, this time preparing barbecued chicken. A whole chicken on the grill, when prepared correctly, has to be one of my all time favorite meals. It's very simple and the flavor is outstanding. While typically I actually enjoy no sauce and instead a generous sprinkling of sea salt, I had some barbecue sauce I needed to use up. Once again this was the right decision for our meal because as we pulled out the beer and enjoyed Ranger IPA, the spicy kick of the sauce was balanced nicely with the very full and hoppy flavor of the Ranger. For the sides we enjoyed some fresh baked corn bread and a generous fresh salad topped with extra virgin olive oil and a wonderfully sweet vinegar.

After getting a basic idea of what the beers tasted like, it was time to try some experimenting with New Belgium's beer in a couple of recipes. I pondered for several weeks about what to try, until my husband and I thought about making fajitas. Beer seemed like a perfect addition to a fajita marinade and guess what, we were right! We split our marinade in half using a half bottle of Mighty Arrow for the first half and a half bottle of Fat Tire in the second half. While both beers worked very well, my husband and I both thought that the Fat Tire was the best overall and made for some exceptional fajita meat. 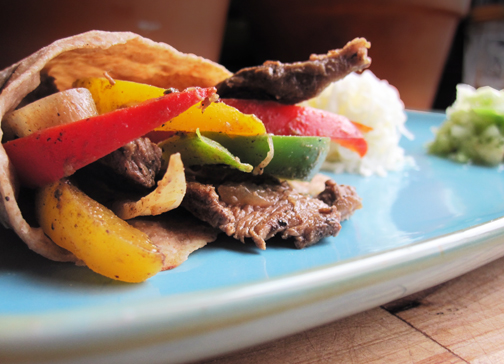 1. Remove any excess fat from skirt steak. Place in a large bowl along with the rest of the ingredients, tossing everything together so that it's thoroughly mixed. 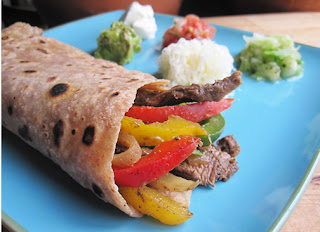 1. Remove skirt steak from marinade and allow it to come to room temperature for about a half hour before cooking it.  Then slice into quarter inch thick strips. Sprinkle with a generous amount of salt and some fresh cracked pepper. Set aside.

2. Toss together peppers and onion and place close to the stove for cooking.

3. Heat your cast iron skillet to smoking hot. (OPEN THE WINDOWS, just a word of advice!) Add a small amount of oil, no more than about a teaspoons worth, to the pan. Then add about an 1/8 of the meat. Quickly toss meat with tongs so it sears on all sides. After about 20 seconds toss in the pepper and onion mixture and cook for an additional 60 seconds, tossing/stirring constantly.

NOTE: To make the best fajitas you need a very hot pan. I think that a well seasoned cast iron skillet works the best in the home kitchen.

4. Remove everything from pan and place on large plate. Cover with aluminum foil or a lid.

5. Make sure to get pan extremely hot again and start the process over. In the end you are going to cook about 8 batches for no more than a minute and a half to two minutes each. Always make sure frying pan is extremely hot or the meat will toughen and not be nearly as enjoyable to eat. The foil/lid will keep everything hot on the plate. 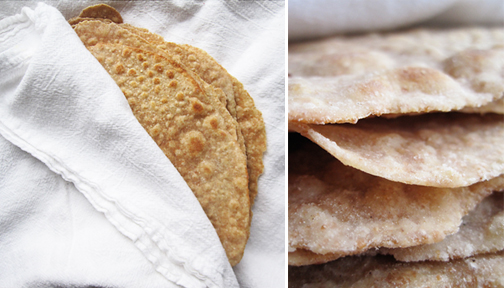 In my kitchen there are a couple of food items I virtually never buy pre-made anymore because the flavor/texture of fresh made is far superior. One of these items is tortillas. I've had a couple of very good recipes I always tend to use, but for my fajitas I decided to do a bit of internet surfing and see if I couldn't find a new tortillas recipe to try. I'm so glad I did, because I found this EXCELLENT recipe by Claudia on allrecipes.com. This is certainly going to be a new family favorite. I made a couple of very slight changes so I could use the ingredients I had on hand and they turned out perfect.

1. In a large bowl, mix together white and wheat flour, along with lard/oil and salt. Use your fingers to rub in the lard/oil until well mixed and mixture resembles oatmeal.

2. Make a large well in the center of flour mixture and pour in boiling water. Use a fork to incorporate water into flour. Then knead dough with your hands, adding extra flour if dough is sticky, until it's smooth.

3. Roll dough into about 18 - 2oz balls (about the size of a golf ball or ¼ cup). Place on a plate or in a container, cover and allow to sit for at least one hour and up to eight hours.

4.  Preheat oven to 450℉ with a cookie sheet or baking stone in it.

5. Lightly flour rolling surface and roll out 1-2 balls very thin or go ahead and roll out all the balls and sprinkle each uncooked tortilla with a little flour so they don't stick together as you stack them up.

6. When oven is hot, place 1-2 tortillas on baking stone/cookie sheet. Bake for about 30 seconds or until tortillas begin to bubble. Flip them with a spatula and bake for an additional 30 - 40 seconds. Remove from oven and place inside a couple of towels to keep them warm while you bake the rest. Don't over cook the tortillas or you'll have something more similar to a cracker once they've cooled.

7. Alternatively you can cook each tortilla in a frying pan. The original recipe says to cook for 10 seconds, then flip as soon as bubbles appear. Cook for 30 seconds more then flip to original side and cook for additional 30 seconds. So total time cooking is approximately 70 seconds.

Note: Unused tortillas can be stored in the refrigerator or freezer. To keep tortillas hot wrap them in several tea towels until you are ready to eat.