Real Food: The Introduction to My New Series

Movement, progression, change are all a part of life. Societies form, they increase, decrease and some simply disappear. Religions transforms man’s mind. New understandings reshape man’s way of life. Technology and science helped man advance. In the end man moves forward, sometimes quickly and at other times progression is hardly noticed. Through it all, man hopefully takes with him some knowledge of the past. The knowledge that will help him in the future and keep him from repeating mistakes and lead him in the right direction. Yet, even when the wisdom is there, the knowledge is all around, man likes to disregard it and instead does as he desires, forgetting how his desires may affect the future going forward.


Life in the last couple of centuries has been filled to the brink with new science, new technologies, new schools of thought and during the whirlwind, as can only be expected, life changed. Most of us have no desire to look back to see what we may have overlooked during the whirlwind, but instead keep our head to the grindstone and choose to simply move forward. The problem is while some of the changes within our society were good, others have left us in a precarious place and by not learning from our past we are bound to repeat our mistakes.

Historically people ate what the land provided them. They made recipes that had been past down generation after generation, because to an extent mother really did know best. As we headed into the 19th and 20th centuries, our understanding of food began to change. We began to be bombarded with new ideas about food and had to ask ourselves, what should we eat, how should we eat it and why should we eat it? Gradually we became more concerned about the nutritional content of food instead of the food itself. As long as we took in the right amounts of nutrients then what form they appeared in didn't particularly matter. With our great knowledge in one area, we've become ignorant in other areas. We lost our ability to cook. The generational recipes, food preparation and food preservation our great, great, great grandmothers and before had used, have been lost to us. Now, it can be a triumph to make a basic batch of cookies, because we've become so reliant on the food industry to provide us with the food we need. We have trusted the industry with our lives, allowing them to tell us what is healthy, tells us what our bodies need to thrive, but something isn't adding up. Why, with our greater knowledge and understanding of food, in particularly food nutrition, are we not actually healthier? In fact, we are in many cases sicker. Perhaps we aren't dying, which people seem to think that lack of deaths must equate to healthier people, but we are sick. We're obese to an extreme that is has never been seen before, we struggle to survive with cancers of every form, our children are plagued with learning disabilities and hyperactivity issues. Heart disease is running rampant. So, we're not dying, okay, but is this really how we want to be living?

This is the first post, of what I hope to be many, devoted to looking at our food today. In order to understand how we came to the place we are, you have to go back and look at some of the steps that lead us on our path. In my next couple of post, I'm specifically going to look at a handful of the changes that have happened in our society that inadvertently shaped our eating habits. It will only be a brief look back or else I'd have to include a book with all the information I'd want to share, but hopefully it will leave people with a basic understanding of how critical even the simplest decisions and understandings can affect our lives going forward.

All the post labeled "Real Food" are going to be a part of this new series, so please stay tuned. I hope you learn some new information and share it with friends and family. 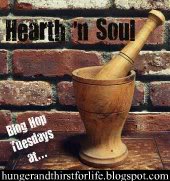