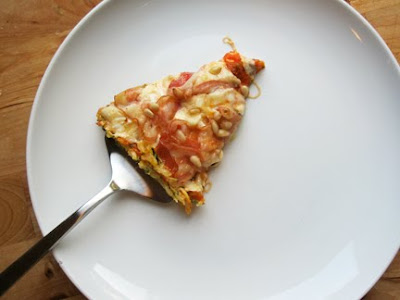 Over the last several months we've been slowly removing gluten and/or wheat from our family's diet. Our son has shown some issues with it. It's seems that every time or at least more often then not he becomes hyper, more aggressive and won't sleep when he's eaten wheat or other glutenous foods. One of the foods we miss eating as of late is pizza. It's easily my husbands favorite food and my son is always thrilled to have it. So what do you do when you can't have wheat... Well this last weekend I tried two new grain free pizza recipes and both where wonderful. The first was the zucchini crust pizza and the second was a coconut flour crust one. Today I'll share with you the zucchini recipe. I found this recipe on Nourishing Days website. If you aren't familiar with this site, it's a must to check out. Shannon (the site owner) always has wonderful recipes that incorporate traditional, organic, made from scratch dishes. Plus lots of great useful information.

I did make a couple tweaks to the recipe she shared going off of one of her readers comments. The reader suggested grating the zucchini instead of slicing and cooking it and then putting it in a towel and squeezing all of it's liquid out. This worked great.  I baked my pizza in a spring form pan that I placed on top of pan with a rack on it. This allowed any extra liquid from the zucchini to run out. You could also cook it in a pie pan, it would just be a little thicker or on a rimmed pizza sheet. The only other thing I did was make a pizza sauce versus seasoning my zucchini with oregano, hot pepper flakes, garlic powder and sea salt. This was mostly because I was making pizza sauce for another pizza so I used it for both. Do check out how Shannon does her recipe if you'd rather nix the red sauce and instead top with crushed tomatoes.

I topped my pizza with homemade red sauce, mozzarella cheese, pine nuts and pancetta. Yum, yum, yum, yum!!!!! That's all I can say! : D If you are vegetarian you could easily omit the meat and add another veggie or just leave it as a cheese pizza.


What You'll Need: for 1 medium pizza
For the "crust"
For the pizza sauce
For the topping
Getting Started
For the Sauce:
1. First make your pizza sauce by cooking your onion in a little bit of olive oil in a medium pot. Cook until onion begins to soften.

2. Add your crushed tomatoes, chopped garlic, oregano (start with 1/4 tsp. and add more later if it needs it, sorry I never measure and just go my taste) and a pinch of sea salt. Simmer for 15+ minutes, occasionally stirring.

3. Blend your sauce with a submersion blender until smooth, then do a taste test. Add more oregano, salt and/or a bit of sugar if it needs it.  I use sugar if my tomatoes don't have any sweetness. I think it adds a nice bit of extra flavor to a pizza sauce, but by no means do you need it. After adding extra seasoning, allow to simmer for an additional 5 - 10 minutes, then set aside

For the zucchini crust:

1. Place shredded zucchini into a clean towel and squeeze out as much liquid as you can. I think I squeeze out close to 5-6 tbsp. 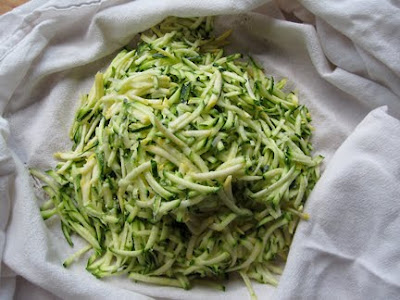 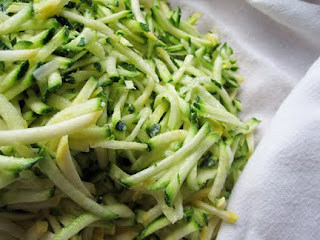 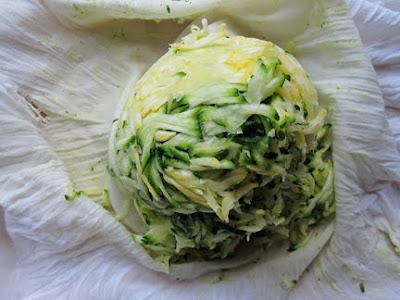 2. In a medium bowl combine your zucchini, oil, egg and a couple pinches of sea salt. Mix well.

3. Spread a small amount of oil in your pizza pan, spring form pan or pie dish and then press your zucchini crust into it.

Note: If you use a spring form pan you must put a pan under it to catch any liquid that may run out of the zucchini! 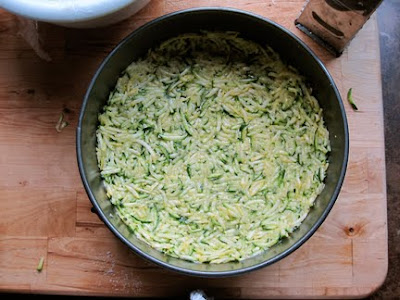 3. Spread your sauce over your crust, then top with your shredded mozzarella, pancetta and pine nuts. 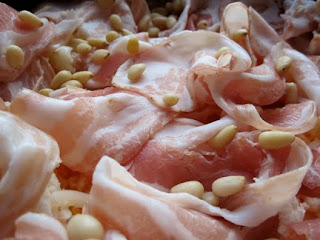 5. Remove pizza from the oven and let sit for 5-10 minutes before serving. 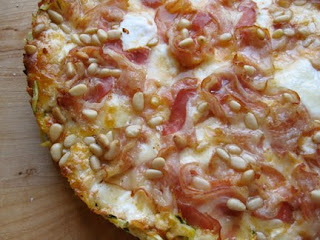 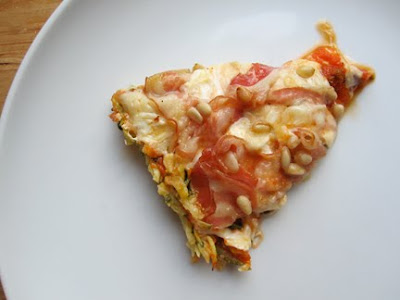 If you have leftovers, this pizza does reheats very well. Perfect for lunch the next day!

Email ThisBlogThis!Share to TwitterShare to FacebookShare to Pinterest
Labels: Pizza, What's for Dinner