My thoughts on breastfeeding and solids.

As I've read through a variety of nutrition blogs and websites recently, especially ones about how to raise our children, I've read about women who are trying their best to raise their babies and children as healthy as possible. These wonderful women are taking active steps to keep processed and artificial ingredients out of their babies' and children's diets.

One of the best ways to start your little ones on a healthy road is by breastfeeding. I think a good majority of women know this and doctors are more regularly talking about the importance of breastfeeding over formula. I share in the belief that women should always try their best to nurse their babies from the get go. Nursing has it's responsibilities. It's not enough to just feed your child, you have to watch what goes into your body as well, taking active responsibility in making sure you are getting a well balanced, nutritious diet. For me that means local organic raw milk and other dairy products; lots of healthy, unprocessed, natural fats like butter, coconut oil, olive oil; high vitamin cod liver oil (and butter oil when I can get it); organic, grass fed beef and truly free-range chickens; cultured and fermented products and, of course, veggies and fruit. By me eating a healthy diet, I'm assured that my nursing daughter is also getting nutritious milk that will help her grow healthy and strong physically and mentally.

I recently read an article from a woman who was solely nursing her babies until 8-12 months without introducing any solid foods to them. She went on to say why she believed it was best to try and nurse as long as possible without introducing solids. Her little ones did not show interest in solids and were content on breast milk alone. While I agree that ideally we should try to nurse as long as possible, that doesn't work for every mother or child. Both of my kids showed very early signs of wanting solids. Isabella (my 5 month old) started grabbing at food on our plates around 3 1/2 months. By 4 1/2 - 5 months she was/is grabbing at my water glass too. She loves to drink water out of mom's glass, I don't let her have a ton, because I don't want her belly filling up on water instead of milk, but she gets a little.

I believe it's very important to stay attuned to your child's need and not simply follow what authors and doctors tell you to do. They do not know your child and every child's needs are different.  Because Isabella was showing such early signs of interest in solids, I began to consider starting her on some solids around 4 months old. She simply didn't seem satisfied on milk alone, whether because I wasn't producing enough milk for her or because it didn't contain enough fat to keep up with the calorie demand her little body needed, I'm not sure. Isabella is very healthy and extremely strong. At 4 months her strength level was more similar to a 6-8 month old. She almost always wants to stand up (with me holding her hands) and loves to jump, which isn't typical (from what I understand) for a 4-5 month old. Because she is becoming so active, she needs more calories than what my milk can supply alone. So what did I do? I let me gut instinct kick in and that told me that it was time to see how she would do with eating something other than breast milk. 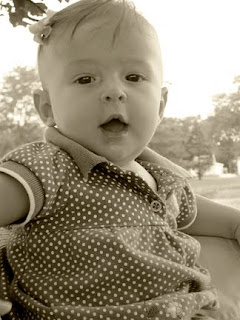 Once I had decided that I wanted to go  down the solids road, I had to decide what to introduce first. Most of us know that rice cereal is the common first food for infants in the US, however as I've been following some of the eating/nutrition practices that the Weston A. Price Foundation has laid out, they spoke of introducing protein instead of carbohydrates first.

"An unfortunate practice in industrial societies is the feeding of cereal grains to infants. Babies produce only small amounts of amylase, needed for the digestion of grains, and are not fully equipped to handle cereals, especially wheat, before the age of one year. (Some experts prohibit all grains before the age of two.) Baby's small intestine mostly produces one enzyme for carbohydrates—lactase, for the digestion of lactose. (Raw milk also contains lactase.) Many doctors have warned that feeding cereal grains too early can lead to grain allergies later on. Baby's earliest solid foods should be animal foods as his digestive system, although immature, is better equipped to supply enzymes for digestion of fats and proteins rather than carbohydrates"  ~ Article, Feeding Babies by Sally Fallon and Mary Enig


The Weston A. Price Foundation believes in introducing an egg yolk instead of cereals because it's easier on the babies digestive system.

A wise supplement for all babies—whether breast fed or bottle fed—is an egg yolk per day, beginning at four months. Egg yolk supplies cholesterol needed for mental development as well as important sulphur-containing amino acids. Egg yolks from pasture-fed hens or hens raised on flax meal, fish meal or insects are also rich in the omega-3 long-chain fatty acids found in mother's milk but which may be lacking in cow's milk. These fatty acids are essential for the development of the brain. Parents who institute the practice of feeding egg yolk to baby will be rewarded with children who speak and take directions at an early age. The white, which contains difficult-to-digest proteins, should not be given before the age of one year. ~ Article, Feeding Babies by Sally Fallon and Mary Enig 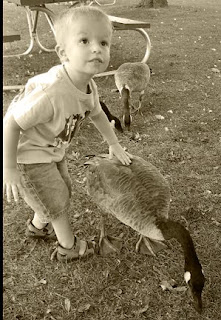 Since I knew I wanted to introduce some type of solid, I decided on trying the egg yolk*. I should mention that with Noah, my now 3 year old, I gave him rice cereal mixed with breast milk. He now shows signs of allergies to gluten and perhaps different grains (we're still trying to figure it out) and although I don't necessarily believe that the rice cereal contributed to this, I was more hesitant to give Isabella a grain as her first solid food, plus I felt that The Weston Price Foundation gave some excellent information about feeding babies.

Isabella had her first egg yolk at 4 months and she loved it, no joke. She opened her tiny little mouth for every bite and even grabbed the spoon with her hand and tried to put it in her mouth. It was awesome to see how happy the little bit of solids made her. Now, after about a month, Isabella wasn't quite as interested in the egg yolk, so I stepped back from giving it to her, again letting her tell me what she needs. I didn't want to force her to eat it. Last night (after about a week break) I tried giving it to her again and she was back to chowing it down and she got to have some mashed banana too! Oh what a happy girl she was. She ate every bite and on top of that SHE SLEPT THROUGH THE NIGHT!! What a happy momma that makes me ! :-D

Since introducing egg yolk and banana, Isabella has never shown any sign that her body wasn't able to handle it. When you introduce any type of new food to your little one, it's important to watch for any signs that may say they are having a hard time digesting it. If they do, stop feeding them that food, wait a couple of weeks and once their digestive system has had some more time to mature, try again.

My reason for writing this is to encourage mothers to trust their natural God given instinct. What works for one mother and child might not work for another. It's very easy to fall into the habit of simply doing what everyone else is doing, even when in reality it's not what is best for your family and you. Of course instinct isn't everything, it's also important to research.  Nothing is ever cut and dry. I've spent a ton of time researching how to feed my family. It's a commitment, but that's a part of parenting.

Here are a couple of great articles about feeding babies from The Weston A. Price Foundation:

*If you think you'd like to try giving your little one egg yolk, make sure you are getting the best eggs possible. To cook it, bring some water to a hard boil and then put your egg in it. Boil for 3 minutes for a medium egg and 4 minutes (or a little less) for large and extra large eggs and then immediately submerge in cold water to stop the cooking process. Split egg in half with a sharp knife and remove yolk. The yolk should be very runny. Make sure baby doesn't get any of the white, at least until after they're one year old. If you can, put a couple grains of sea salt (I like Celtic Sea Salt) on the yolk to add extra minerals.