Making a "Train Table" for My Son!

This is a project I've wanted to do for awhile, especially with how much my little guy loves playing with his train set. I know I could have gone out and purchased a new or used table and done it for a pretty good price if it was used, however I didn't want a train table sitting out all the time. The only place we really had decent space for it would be in my son's room. However, we have a hard enough time with keeping him in bed during nap times, so I didn't think putting his favorite toy in his room would help us any! Instead I decided to create a temporary train table that goes on top of the coffee table for playtime and could be put away behind the couch when it wasn't in use. That's how I like toys – it's fine having them out when they're being used, but I'm not a fan of maneuvering around them or looking at them all the time when they aren't. Plus, I find my son plays much better when things stay picked up and I can rotate what toys he plays with on either a daily, weekly or monthly basis. It keeps things more interesting! We can have a "let's go shopping in the toy closet" morning and he can pick out items that look fun to him.

This was a pretty easy project if you have a little creativity and if not, no worry, that's what the internet is for or reading people's blogs! : - )

I went to my local hardware store and purchased two pieces of 1/2" thick particle board. I wanted something sturdy enough that when it overhung the coffee table it wouldn't bend.
I think the pieces I purchased were approximately 30"x5' and only about $8 each. They were a little longer then I wanted so I cut off about 8" of the length. All I used was a ruler and black marker to mark a straight line and a handsaw to cut the board. Once you start cutting, a handsaw will naturally stay in a pretty straight line and with a black line as a guide this is fairly easy to do. I might mention I did this all in our family room on the coffee table and yes there is carpeting on the floor, but no big deal I just vacuumed up the mess after I was done. The only other place I could have gone was out to the garage, but with sub-zero temperatures outside that was just a NO for me! I prefer warmth thank you! : - ) One other thing I did was round the corners with some sand paper. They don't need to be rounded much, but you don't want someone getting scratched on a sharp edge. 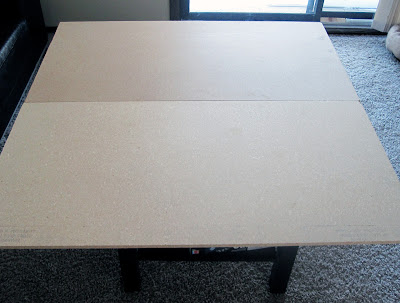 I placed the two boards next to one another and then began to draw out a very basic design to paint. This is where the internet can be helpful if you need a little boost in the creativity area! Just check out some train tables on-line. There are tons of different designs. Everything from the super-simple to over-the-top. Since I'm making this for a two year old, I wanted simple. We have a play rug that has a bunch of buildings and winding roads on it, but he doesn't seem particularly captured by it at this point, so simple seemed to make more sense. 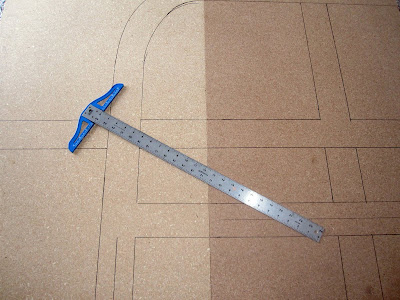 I only drew on a basic idea for the streets, which helped give me some structure to my design. After that I free handed everything and honestly I didn't have an end design in mind. That's just my preference for doing things. By all means if you decide to try this project go ahead and plan or even sketch out a design. Do whatever feels most natural to you.

From there it was like painting in a coloring book. I filled my large spaces in with color. I used basic acrylic paint you could get at your local craft store. Some hardware stores have small containers of sample paint colors and you could use them too, especially if you don't want to make two stops. 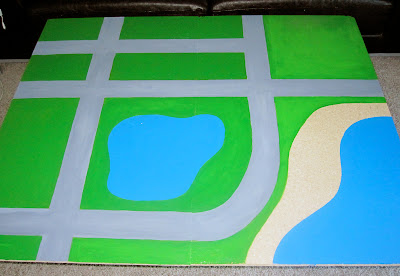 Once the paint had dried, I went back in and added some extra detail to make it a bit more fun. One thing to note, the particle board likes to absorb the paint and I found I needed two coats in some places to even out the color. If you have to do this, just make sure your paint is dry between each coat. If you make a mistake, no worry—just paint over it. If you can't achieve perfection, don't be hard on yourself, perfection is for machines. Little flaws aren't a big deal and just add character to your project, and character is great! One helpful hint, when I was doing the road it can be hard to keep a straight line with the paint brush so I outlined my road with a black permanent marker, using a ruler of course. This gave my road a little more solidness and was more appealing to me. It doesn't need to be done, I just preferred it this way. 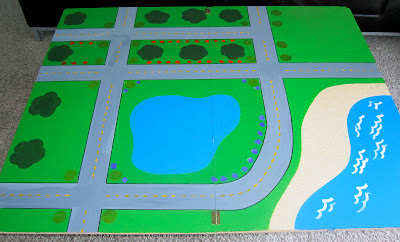 Finally, I added two butterfly hinges to hook the boards together. I put them a couple of inches away from the edges so they wouldn't "get in the way" of playing. The hinges allow me two fold the boards together, protecting the paint and then I can easily slip them behind our couch when we aren't using them. Plus, it helps with the stability of the boards on the coffee table. It wouldn't work very well if one board would slip or move with a train track on it. The track would fall apart and then you'd have a very unhappy kid. You might also consider adding a couple of low profile rubber grips to the back of the boards to make sure they can't slip of the coffee table and accidentally hurt someone or something. The boards I purchased were heavy enough that this wasn't an issue so I didn't need any type of grip. You could also put down a carpet/rug grip on the table. This would help protect your table and keep the boards from moving.

When it was all said and done, this is what I ended up with. My son loves it! 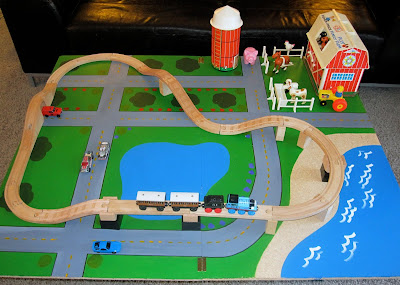 Email ThisBlogThis!Share to TwitterShare to FacebookShare to Pinterest
Labels: My Artwork